There are SO many volunteer efforts we will be joining! It's hard to narrow it down because there are numerous amazing causes and opportunities to give back. But we finally decided on a some. If you have any recommendations you would like us to share or donate to please contact us!

UPDATE: With a heavy heart I share that Amin Monzadeh, founder of H.A.T.S., has tragically passed away due to a car accident. He was a inspiration to me and many others. Amin was an angel on earth changing so many lives and being so selfless. Now he can be an angel in heaven and continue to watch over those he cared so deeply for and worked so hard to make even just one day better for, the transients of Los Angeles. You are missed Amin. Thank you for changing the world for the better.

2013 - CURRENT
Second Saturday of every month is READING TO KIDS! Such a fun time. Volunteers are assigned a grade k - 5, with at least 2 volunteers per group, we read a previously chosen book, do an activity, and at the end each kid gets a book to take home! To sign up and get more info visit ReadingToKids.org

Nov. 1st, 2012
H.A.T. will be doing their annual sleeping bag drive on Skid Row set for November 18th, 2012. If you would like to donate or volunteer please contact us or Angelo: angelofrancois@hotmail.com  http://www.facebook.com/angelo.francois.16?fref=ts

July 16th, 2012
The journey of H.A.T. founder Amin and partner Geraldine has taken them from Los Angeles to the north, of California that is. We miss them greatly! As they continue their efforts in the bay, the H.A.T. family and crew is still going strong in Southern CA. Thanks in large part to Angelo Francois but each member of the movement is just as important as the next. We recently did a food drive (food, beverages, hygiene kits, and clothes) in downtown LA. HUGE THANK YOU to all those that donated money, products, and their time, especially those who cooked the wonderful dishes! A lot of new volunteers came out Sunday, a majority of them were teens. It is great to see the youth helping their community and not being afraid of the people on the streets of DTLA. The smiles of that day were made possible by everyone involved from the security guard who stopped just to help to Clarence, a homeless man who is always willing to assist us any way he can, to each and every finger that was lifted to better the lives of others. You made this happen. You did it. Thank you! :)


May 10th, 2012
I just saw the video from Giving Backpacks! I LOVE it! We will be releasing it soon! I can't wait for you all to see it! Thank you to Black Tie Media!

March 5th, 2012
I have so many mixed emotions about the backpack drive we did yesterday in downtown Los Angeles on Skid Row. For those of you who aren't familiar Skid Row is an area in DTLA (downtown Los Angeles) that is highly populated with the homeless.

There's a common misconception about the homeless. They are generalized as a whole as being drug addicts, insane, lazy, dangerous. Yes some do drugs, there are those who have not had proper medical care so suffer from mental disease, others aren't interested in using their abilities to find work, and a few you should steer clear of because of their anger issues. This describes human beings in general not just the homeless. Unfortunately transients get labeled and judged more harshly than someone with a roof over their head. When someone thinks of "a homeless person" most minds automatically pop an image into their head with the above stigmas attached. Who we saw was nothing close. There were men with suits on, women with purses in work clothes, elderly, handicapped, families, teens, children, even babies. There's so many different types of people that we saw. Many were getting the volunteers and the transients confused with each other. You can't tell just by looking at someone.


The homeless helped the homeless Sunday. When all of the volunteers' vehicles packed with supplies began to pull up there was a couple waiting who began to help unload. They organized piles of goodies, gathered transients to line up, they help spread the word we have arrived, they even assisted with handing out hygiene kits, backpacks, food, clothes, and water. This couple were two of the best volunteers we had. We began to realize that they knew many of the people we were helping. Are they regular volunteers? Are they just friendly? Turns out this couple is homeless themselves living on Skid Row.

In 2011 on an episode of "Secret Millionaire" Amin, founder of H.A.T., was seen giving the shoes off of his own feet to a homeless man passing by that had excrement covering his own shoes. Amin affected us all in that moment and his influence continues today. On Sunday two of our volunteers, now members of the H.A.T. crew, took their brand new shoes off of their feet and gave them to a young boy and his family. Their gesture was so touching I had to hold back my tears.

The entire experience was so inspiring, Amin, the H.A.T. crew, the volunteers, and supporters. But what I was really moved by was the honesty, gratitude, and lack of greed of the homeless. We set up shop (tables organized by item on each, ie. bags, then food, then hygiene products, then clothes) and had a long line of transients waiting for us to begin handing out the much needed supplies. They waited patiently. Not one was complaining or asking when we would start. No one cut in front of another in line. They all listened when asked to straighten the line. When they would receive one item (ie. a cup of noodles) and we would extend our hand offering them another they would kindly decline "I already have one". Honesty. We had more than enough of certain items but they were still modest when we would try to give them more. We wanted them to take at least 5 more (ie. water) but they would only take an additional one. When we assured them it was okay "have as many as you want", their eyes would light up and a grin would brighten their face, one they attempted to hide. Lack of greed. After receiving what we had brought them they would rejoice "I'm blessed! I'm blessed!". Some were left speechless. One man rolled away in his wheelchair so grateful tears filled his eyes. Outsiders judge transients so harshly, when in fact there's certain qualities that many don't have that can be learned from the homeless.

Thank you to everyone!!!
Thank you to all of the volunteers, supporters, H.A.T. crew and family, splAsh Effect team, and especially
Amin for inspiring all of this!

Today is the day! Giving Backpacks! With the crew of H.A.T (Helping All Transient), SplAsh Effect (SplAsh Enterprizes Ripple Effect)!! We are meeting at 4pm @ 8121 Melrose Ave Los Angeles Ca 90046. Our depart time will be no later than 445p. Please arrive early so you meet everyone, load, and be assigned tasks. Anyone is welcome to join! 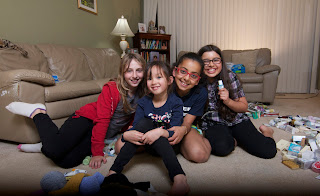 Tonight we packed hygiene kits with the students of Kenter Canyon Elementary Charter School! The kids are great and so giving. We had a lot of fun. Their mothers are amazing. There was such an amazing energy. I can only imagine how Sunday will be! We have so many volunteers and supporters! :)

The brothers and sisters of Sigma Eta Phi have teamed with H.A.T. (Helping All Transient) in putting together and passing out backpacks with hygiene kits on Skid Row (a heavy homeless populated area) in Los Angeles. H.A.T. has been featured on the popular ABC show Secret Millionaire! 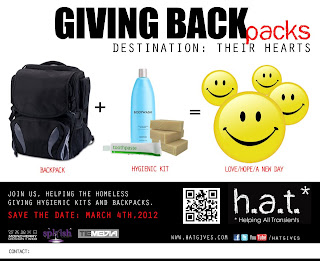 We are excited to announce we just named The Black Tie Media as splAsh Effect's official camera crew!!

Sigma Eta Phi is currently gathering more pledges to become Role-Models!!  Check out how you can pledge: S.E.P.

Ashley Romero
Ashley's mission is to inspire people to make positive changes in their lives and the lives of others through self love and sharing that love with the world and beyond.